Kim Golebiowski noticed the immediate changes that double glazed windows provided for her twin daughters, Lucy and Hannah. The upgraded window insulation has resulted in more constant temperatures in the girls’ bedroom. “It’s that change in temperature when you’re asthmatic. And we just didn’t find that with the double glazing. We just didn’t have problems through the night. It’s amazing!”

When the Golebiowski family built their new home 10 years ago, double glazing was not something that was even considered. But the birth of Lucy and Hannah brought concerns with both girls suffering from asthma. Lucy suffered the most. “Every year she ended up crook”.

After three years of this, the Golebiowski’s knew they had to do something. Kim saw an ad in the paper for retrofit double glazing and talked to The Double Glazing Company about their solution. Seeing what could be done, they chose to double glaze the bedrooms and ensuite in their home.

“Straight away with her health we noticed it. There would be nights that I would be up with her all night. We haven’t really had any nights like that since we’ve had it put in. It’s been huge – asthmatic wise.”

The Double Glazing Company retrofitted new double glazing into the existing window and door frames. The finished result is hard to tell apart from the original – just some subtle changes that are consistent with what would be seen for double glazed windows in new homes. For Kim this was important. “That was a big thing for us – it didn’t affect the window frames and sills. They all remained.”

Double glazing has provided more constant temperatures and condensation is a thing of the past in the girls’ bedrooms. ”It was interesting – when John came to fit them, he started with the two bedrooms. He did the fixed windows and then he came back the next day and did the opening part. In the morning the fixed part was dry and the other part that hadn’t been double glazed was still wet. It was noticeable straight away.” 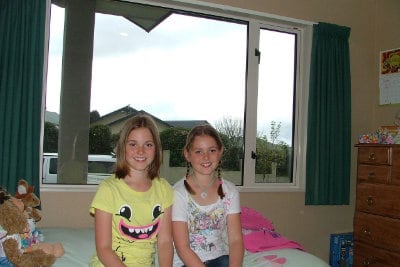